What terrible news reached me yesterday in Switzerland. I didn’t want it to be true, but when I saw the news from Hawaii today, it was a reality. Haunani-Kay Trask walked peacefully across the rainbow yesterday and arrived in the other life. For me personally it is a heavy blow that I liked, sorry I loved this woman with power, her ideologies, how she fought for her country and her natives. Respect for Haunani for giving her life for her students, teaching them about Hawaiian culture and history. It is a loss for me to lose this woman because I was planning to interview her next year when I fly back to Hawaii. It also teaches me not to hesitate and wait …. If it is an imenser for me, sorry I am at a loss for words, what is it for a loss for Hawaii? Indescribable! I am with her in my thoughts and am with the Hawaiians. I am really sorry. Yes, I’m not Hawaiian, only my former wife was Hawaiian, but she learned so much about Hawii … I also have more friends in Hawaii than here in Switzerland. My deepest, sincere, sincere condolences to your family, friends and your very close ones! Also my condolences to all Hawaiians. I can feel the pain of my friends in HAwaii and I am with them.

I just took Wikipedia and from the Universitity of Hawaii, but I will soon but a documentary together .

Haunani-Kay Trask was born the first daughter of Haunani Cooper Trask and Bernard Kaukaʻohu Trask. Trask and her family are descendants of the Piʻilani line of Maui and the Kahakumakaliua line of Kauaʻi.[5] She was born in California, grew up the Koʻolau side of the island of Oʻahu, in the islands of Hawaiʻi,[6] and came from a politically active family. Her paternal grandfather, David Trask Sr., was chairman of the civil service commission and the police commission in 1922, served as the sheriff of Honolulu from 1923 to 1926, and was elected a territorial senator from Oʻahu in 1932.[7] Mililani B. Trask, her younger sister, is an attorney on the Big Island and was a trustee of the Office of Hawaiian Affairs created by the 1978 Hawaii State Constitutional Convention to administer lands held in trust for Native Hawaiians and use the revenue to fund Native Hawaiian programs.[citation needed]

During her time studying politics in her graduate program at the University of Wisconsin-Madison, Trask began to engage in feminist studies and in a feminist world. During this time, she even considered herself to be a feminist.[5] Trask wrote that „in the feminist imagination, life was honored and power reshaped into an enabling force for the protection of both the human and the natural world.“[5] This belief around feminism led Trask to write her first publication titled Eros and Power: The Promise of Feminist Theory which was a revised version of her doctorate dissertation.[citation needed]$ 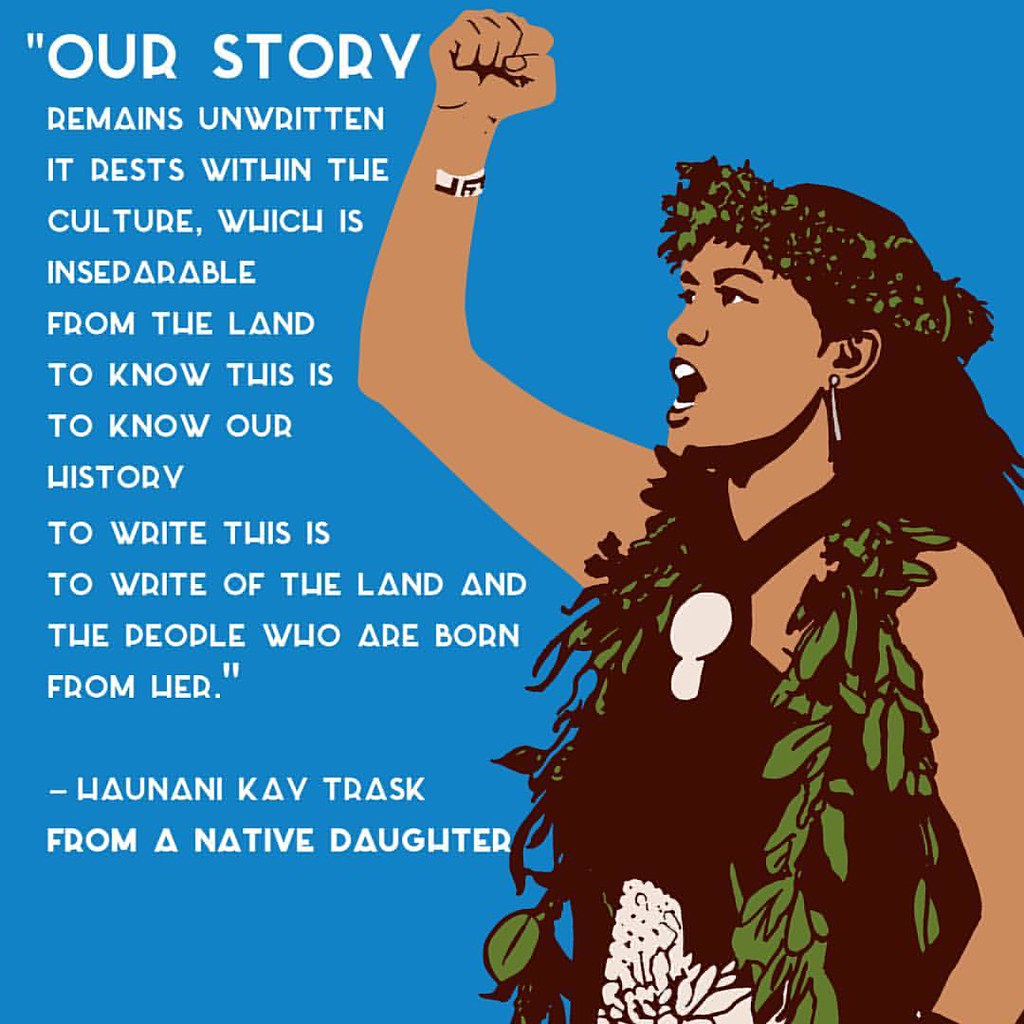 Later in Haunani’s work, she denounced her role as a „feminist“ because of the mainstream focus on American and Whiteness, being more aligned with Transnational Feminism. She wrote: „I recognized that a practicing feminism hampered organizing among my people in rural communities. Given our nationalist context, feminism appeared as just another haole intrusion into a besieged Hawaiian world. Any exclusive focus on women neglected the historical oppression of all Hawaiians and the large force field of imperialism. Now that I was working among my people, I saw there were simply too many limitations in the scope of feminist theory and praxis. The feminism I had studied was just too white, too American. Only issues defined by white women as „feminist“ had structured discussions. Their language revolved around First World „rights“ talk, that Enlightenment individualism that takes for granted „individual“ primacy. Last, but in many ways most troubling, feminist style was aggressively American.“[5]

Trask opposed tourism to Hawaiʻi and the U.S. military’s presence in Hawaiʻi. In 2004, Trask spoke out against the Akaka Bill, a bill to establish a process for Native Hawaiians to gain federal recognition similar to the recognition that some Native American tribes currently possess.[8] Trask felt that this bill did not do justice to Native Hawaiian people because it allowed the U.S. Government to control how it is that Native Hawaiians are able to engage with their statehood without recognizing Hawaiʻi as a nation of its own.[9] Trask also claimed that hearings were not being held on the bill with the intention of leaving out important native voices and opinions.[9]

In 1990, a University of Hawaiʻi philosophy major named Joey Carter wrote in an editorial in the Ka Leo O Hawaiʻi student newspaper against the use of the Hawaiian word haole, claiming that the term was derogatory and that the word ‚haole‚ is used the same way that the ‚n-word‚ has been used against African Americans in United States history.[11] Trask wrote an article in the Ka Leo O Hawaiʻi in response to Carter’s claims: „Mr. Carter is a privileged member of American society because he is haole, whether he acknowledges his privilege or not. His very presence in Hawaiʻi, and before that in Louisiana, is a luxury provided him through centuries of white conquest that visited genocide on American Indians, slavery on Africans, peonage on Asians and dispossession on Native Hawaiians.“[12]

Trask was the longtime partner of University of Hawaiʻi professor David Stannard.[13]

Trask’s uncle, Arthur K. Trask, is an active member of the Democratic Party and a supporter of Hawaiian rights. David Trask, Jr., another uncle, was the head of Hawaiʻi’s white collar public employees‘ union, the Hawaii Government Employees Association, an affiliate of AFSCME, and an early proponent of collective bargaining for Hawaiʻi’s public employees. Trask’s grandfather, David Trask, was a member of the legislature of the Territory of Hawaiʻi for twenty-six years as a Democrat. He was a key proponent of Hawaiʻi Statehood.[14] Trask was not publicly active in recent years but was under the care of nurses according to her family.[15] She died on July 3, 2021.[16]

Hearts are heavy across Hawaiʻi and the world as many mourn the death of University of Hawaiʻi at Mānoa Professor Emerita Haunani-Kay Trask. Loved ones confirmed the exemplary Native Hawaiian scholar died on Saturday, July 3.

Trask who retired in 2010, started her extensive academic career at UH Mānoa in 1981 as an assistant professor in the American studies department with expertise in feminist theory and Indigenous studies. She is credited with co-founding the contemporary field of Hawaiian studies and went on to become the founding director of the UH Mānoa Center for Hawaiian Studies.

“Professor Trask was a fearless advocate for the Kānaka Maoli (Native Hawaiians) and was responsible for inspiring thousands of brilliant and talented Hawaiians to come to the University of Hawaiʻi,” said Dean Jonathan Kamakawiwoʻole Osorio. “But she also inspired our people everywhere to embrace their ancestry and identity as Hawaiians and to fight for the restoration of our nation. She gave everything she had as a person to our Lāhui and her voice, her writing and her unrelenting passion for justice will, like our Queen, always represent our people. E ola mau loa e Haunani Kay Trask, ʻaumakua of the poet warrior.”

“Dr. Trask was a visionary leader of the Hawaiian sovereignty movement and the founding director of Kamakakūokalani Center for Hawaiian Studies at UH Mānoa. She served her career as tenured professor in our department inspiring critical thinking and making important contributions in areas of settler colonialism and indigenous self-determination. More importantly, she was a bold, fearless, and vocal leader that our lāhui needed in a critical time when Hawaiian political consciousness needed to be nurtured. Our center mourns her passing and sends our aloha and to the Trask ʻohana. Our department remains committed to carrying on the legacy of Professor Trask in educating and empowering the lāhui,” Kamakakūokalani Center for Hawaiian Studies Director Kekuewa Kikiloi said.

“The Native Hawaiian Place of Learning Advancement Office mourns the tremendous loss of Kumu Haunani-Kay Trask. We pause and reflect on her leadership and honor her as one of the founders of this office; as one of the members of the seminal 1986 Kaʻū Task Force and its subsequent report, the first of four Native Hawaiian reports to recommend and advocate for the creation of an office such as ours,” said UH Mānoa Native Hawaiian Affairs Program Officer Kaiwipuni Lipe. “Furthermore, UH Mānoa’s designation as a Truth, Racial Healing, and Transformation Campus Center—a campus that shows the potential to be a major player in jettisoning racism and preparing the next generation of leaders who will do so—builds on the foundation that Kumu Haunani helped to set at this university. She had an unwavering commitment to speaking truth to power and was a leader in normalizing that on our campus and throughout our communities. She was and continues to be a lamakū—a leading light—for all of us. Aloha wale ʻoe e Kumu Haunani, ē. E moe mālie aku ʻoe i ka pō loloa.”

In April, Trask was elected to the American Academy of Arts and Sciences, among the nation’s oldest and most prestigious honorary societies. The induction, set for spring 2022 will place her alongside other notable lifetime members including John Adams, Charles Darwin, John F. Kennedy, Martin Luther King, Jr., and more than 250 Nobel and Pulitzer Prize winners. It is one of the highest honors bestowed in academia.

“The University of Hawaiʻi mourns the loss of Professor Haunani-Kay Trask, a profound mind who was one of our most influential teachers and scholars,” said UH President David Lassner. “She provided all of us at UH and in Hawaiʻi with opportunities to learn and grow as we each reconsider our roles and kuleana in Hawaiʻi. Her relationship with the University of Hawaiʻi was complex, and we are a better institution for her passion, insights, criticisms, advocacy, contributions and influence. My deepest condolences to her life partner, Professor David Stannard, her ʻohana, the generations of students she taught and mentored over the years, and all who loved her.”

Trask, a Windward Oʻahu native was a critical voice in what she called, “the modern Hawaiian movement” and the broader Hawaiian sovereignty movement. Throughout her career she advocated for issues which support Indigenous nations around the globe. She worked with leaders in Indigenous communities from throughout North America to the Māori of Aotearoa (New Zealand) and the Basque people of Spain among others. Her international reputation led to her addressing United Nations gatherings in Geneva, Switzerland and Durban, South Africa.

Nourish the next generation

Stemming from a notable lineage of politicians and civil servants in Hawaiʻi, Trask made it her mission to fight for kānaka maoli (Native Hawaiians) rights and lands, all while encouraging the younger generation of kānaka attending the university to embrace their heritage.

In 2019, Trask received the Angela Y. Davis lifetime achievement award by the American Studies Association. The honor recognizes scholars who have applied or used their scholarship for the public good. Trask also graced USA Today’s Women of the Century, which highlights women across the nation and U.S. territories who have motivated and inspired others.

Her legacy also lives on through the David E. Stannard and Haunani-Kay Trask Endowed Scholarship in American Studies which supports UH Mānoa American studies students who are pursuing research in Indigenous and/or Pacific Island studies.