In the early part of the 20th century the seaport of Honolulu, capital of the American Territory of Hawaii, Queen of the Pacific, was more substantial than a town — but less so than a city.

Lewis Mumford, the architecture critic for New Yorker magazine, was unimpressed. After a visit in 1938, the 41-year-old, who went on to become an internationally known cultural critic, ascribed no rhyme or reason to Honolulu. Its arrangement of streets and houses was “higgledy-piggledy” while its growth pattern was “spotty and erratic,” he wrote.

Picture it: Just after World War I, downtown Honolulu and Chinatown bustled next to the steamship-clogged harbor where sugar and pineapple were shipped off to the mainland, swapped for lumber, machinery and everything else the Territory needed. Nuuanu stream was an open sewer, and outward urbanization was an unsupervised and unplanned free-for-all; Honolulu home rule, in the form of a city/county government and a mayor, was just a decade old.

Stream-fed and tidal wetlands dominated much of the lowland plain between Punchbowl and Diamond Head. The only public parks of any note were Aala and Kapiolani, and Thomas Square. The elite sought out the cool mauka comforts of Nuuanu, Makiki and College Hill, while poor farmers crowded into Kapalama and Kalihi. Middle-class subdivisions were popping up in the Pawaa, Sheridan and McCully tracts along the high ground of King and Beretania streets, serviced by electric trolley cars of the Honolulu Rapid Transit company.

The old royal estates at Waikiki were subdivided into cottages and small hotels. Many Hawaiians huddled in Kakaako. In the far-off east, a sprawling grid of streets and small residential lots, slowly filling with houses, stretched from Kapahulu up and over Kaimuki’s hump all the way to Waialae, while a few villas clung to Diamond Head.

Anticipating the eventual completion of the wetland-draining Ala Wai Canal in 1928, the advisory City Planning Commission mapped out a wide boulevard looping from downtown southeast across the vacant lowlands to the intersection of Kapahulu Avenue and Waialae Road. Suggestions for the roadway’s name included “Missionary Highway” and Kapiolani Boulevard, according to historian Donald Johnson in his panoramic history, The City & County of Honolulu: A Governmental Chronicle (1991).

Along with the new roadway, the commission mapped in most of central Honolulu with neighborhoods hewing to regular gridded street patterns. The map included a new waterfront park, Ala Moana, to replace the scrappy shore between Waikiki and Kewalo Basin and opened in 1934. Another park was sketched in for the mauka side of the Ala Wai Canal. The map was approved by the Honolulu Board of Supervisors in 1923. Still, speculators and landowners, particularly the big land trusts, made a mockery of the city’s unenforceable best-laid plans: streets were often narrowed and bereft of sidewalks or drainage. When storms hit, many low-lying neighborhoods became mud puddles.

The global depression of 1929 put the brakes on the Territory’s economic growth and quickened the population drift from the fields into town. As in the plantation camps, city neighborhoods defined themselves ethnically, and housing often mimicked familiar plantation cabins. A homeless encampment at Kewalo Basin was called “Squattersville”; a tourism executive suggested it be turned into a tourist attraction, a “typical Hawaiian village.”

In 1938, the Honolulu Board of Parks invited Mumford to travel from New York to Honolulu to survey the burgeoning port and make recommendations. The critic wrote up his thoughts in the pamphlet “Whither Honolulu?” Packed with earnest, sometimes obvious bottom-line prescriptions, it remains a touchstone document in Honolulu’s urban archeology.

After praising Honolulu’s “unrivaled situation” and describing it as a “stage for a complex and beautiful human drama,” Mumford reassured his readers that one of the good things about “overgrown” Honolulu was that it had not gotten “out of hand.” Most of the city was made out of wood, he consoled, so it could be altered and modernized relatively easily. Faint praise.

Mumford forcefully condemned Honolulu’s lack of orientation toward the ocean and lack of public access to it. He blamed the city’s street layout — that hasn’t changed a whit since. He called out the city’s ineptitude for its failure to exploit the trade winds in both building siting and street layout, for the overcrowding in filthy slums in central areas, and for its “ill-kempt” development patterns.

“No systematic attempt has apparently been made, during the last 30 years, to correct the haphazard methods by which the land has been platted and connected together,” he wrote.

A true progressive, he defended the rational use of land-use police powers by a municipality: “The American city has ample constitutional means for controlling the density of population and extent of land coverage in the interest of public health and hygiene.”

But, then as now, variances and exemptions to feeble plans and land-use laws the government did manage to enact were the rule and not the exception. Corruption was pervasive. The Board of Supervisors (today’s City Council) was nicknamed the “Board of Subdividers,” much like today’s city Department of Planning and Permitting is sometimes called the Department of Permitting and Permitting.

Another parallel: Mumford bemoaned the “hideous bottle-neck of congestion” between east and west parts of the city whose cause he imputed to simple bad planning.

Analogizing Honolulu as a beautiful woman, Mumford observed that she “relies on her splendid face and body to distract attention from her disheveled hair, her dirty finger nails, or her torn skirt.”

One of Mumford’s most seriously wrong predictions in “Whither Honolulu?” was that the city’s population, which had more than quadrupled between 1900 and 1940 from 39,000 to 179,000, would start to stabilize, due, he argued, to the dampening effects of the economic depression, the looming threat of war, and advances in contraception. The stipulation justified his opposition to wasteful suburban sprawl and to the “reckless fantasies,” “makeshift planning,” “jerry building,” and “amateurish improvisation” that go with it.

Rather than sprawl, the city must renovate itself, Mumford urged, make itself “permanently attractive as a human home.” In defense of the rural Windward Side, Mumford opposed the much-dreamed-about Pali highway/tunnel project, which didn’t get going until the late 1950s in any case. In anticipation of tourism’s growth, he endorsed the idea of a regional planning authority.

Furthermore, he urged that allowances be made at some beaches for nude swimming, as in England. “One of greatest delights of bathing in the sea or the sun is the enjoyment of the untrammeled contact with these elemental forces.”

Mumford concluded his report with this: “Out of the shabbiness and messiness of the present city, a new order may emerge; and out of its natural charm, a maturer beauty — more deeply humanized, more friendly to human desire — may be constructed. Only two things are lacking: not the power of execution but the imagination to conceive and the courage to desire.”With the trauma of Pearl Harbor and World War II, Honolulu’s sloppiness got worse, not better. Oahu’s wartime population doubled. Then, in late ’45-early ’46, everyone just as quickly left, abandoning mountains of surplus. According to Johnson, the military released countless temporary buildings of all types for repurposing. With lumber and other materials scarce, “people bought them, moved them, and began using them for homes and storage facilities throughout the city,” Johnson wrote. The Territory packed Iolani Palace’s grounds with wartime sheds that, as offices, lasted through the 1950s. Quonset huts were ubiquitous on Oahu well into statehood as a kind of shabby chic…but then, Honolulu had always been a no-need kind of place.

In the similar, disapproving phrases of Mumford and Johnson — “lack of courage,” “lack of vision,” “amateurish improvisation,” “reckless fantasies,” “no great imagination,” “haphazard residential development,” “higgledy-piggledy” — we hear a few simple facts: the first edition of the Oahu General Plan wasn’t adopted until 1964, and the City and County of Honolulu did not have a comprehensive zoning code in effect until 1968. 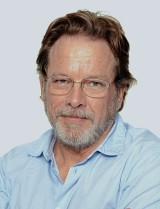 Journalist Curt Sanburn has written about Hawaii affairs for over 20 years. Raised in Honolulu, the Iolani School grad (’73) lives near Land’s End in San Francisco but returns to his home state frequently.