From “The Hawaiian Spectator”

A few miles east of Laie, on the windward side of the island of Oahu, are situated the valley and falls of Kaliuwaa, noted as one of the most beautiful and romantic spots of the island, and famed in tradition as possessing more than local interest.

The valley runs back some two miles, terminating abruptly at the foot of the precipitous chain of mountains which runs nearly the whole length of the windward side of Oahu, except for a narrow gorge which affords a channel for a fine brook that descends with considerable regularity to a level with the sea. Leaving his horse at the termination of the valley and entering this narrow pass of not over fifty or sixty feet in width, the traveller winds his way along, crossing and recrossing the stream several times, till he seems to be entering into the very mountain. The walls on each side are of solid rock, from two hundred to three hundred, and in some places four hundred feet high, directly overhead, leaving but a narrow strip of sky visible.

Following up the stream for about a quarter of a mile, one’s attention is directed by the guide to a curiosity called by the natives a waa (canoe). Turning to the right, one follows up a dry channel of what once must have been a considerable stream, to the distance of fifty yards from the present stream. Here one is stopped by a wall of solid rock rising perpendicularly before one to the height of some two hundred feet, and down which the whole stream must have descended in a beautiful fall. This perpendicular wall is worn in by the former action of the water in the shape of a gouge, and in the most perfect manner; and as one looks upon it in all its grandeur, but without the presence of the cause by which it was formed, he can scarcely divest his mind of the impression that he is gazing upon some stupendous work of art.

Returning to the present brook, we again pursued our way toward the fall, but had not advanced far before we arrived at another, on the left hand side of the brook, similar in many respects, but much larger and higher than the one above mentioned. The forming agent cannot be mistaken, when a careful survey is made of either of these stupendous perpendicular troughs. The span is considerably wider at the bottom than at the top, this result being produced by the spreading of the sheet of water as it was precipitated from the dizzy height above. The breadth of this one is about twenty feet at the bottom, and its depth about fourteen feet. But its depth and span gradually diminish from the bottom to the top, and the rock is worn as smooth as if chiselled by the hand of an artist. Moss and small plants have sprung out from the little soil that has accumulated in the crevices, but not enough to conceal the rock from observation. It would be an object worth the toil to discover what has turned the stream from its original channel.

Leaving this singular curiosity, we pursued our way a few yards farther, when we arrived at the fall. This is from eighty to one hundred feet high, and the water is compressed into a very narrow space just where it breaks forth from the rock above. It is quite a pretty sheet of water when the stream is high. We learned from the natives that there are two falls above this, both of which are shut out from the view from below, by a sudden turn in the course of the stream. The perpendicular height of each is said to be much greater than of the one we saw. The upper one is visible from the road on the seashore, which is more than two miles distant, and, judging from information obtained, must be between two and three hundred feet high. The impossibility of climbing the perpendicular banks from below deprived us of the pleasure of farther ascending the stream toward its source. This can be done only by commencing at the plain and following up one of the lateral ridges. This would itself be a laborious and fatiguing task, as the way would be obstructed by a thick growth of trees and tangled underbrush.

The path leading to this fall is full of interest to any one who loves to study nature. From where we leave our horses at the head of the valley and commence entering the mountain, every step presents new and peculiar beauties. The most luxuriant verdure clothes the ground, and in some places the beautifully burnished leaves of the ohia, or native apple-tree (Eugenia malaccensis), almost exclude the few rays of light that find their way down into this secluded nook.

A little farther on, and the graceful bamboo sends up its slender stalk to a great height, mingling its dark, glossy foliage with the silvery leaves of the kukui, or candle-nut (Aleurites moluccana); these together form a striking contrast to the black walls which rise in such sullen grandeur on each side. 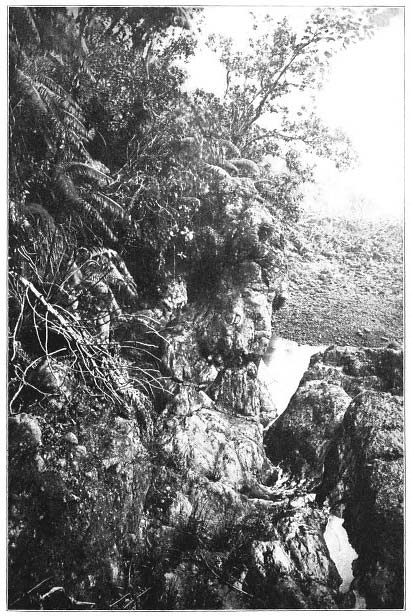 Kuumana, the Rain God of Kau.

Nor is the beauty of the spot confined to the luxuriant verdure, or the stupendous walls and beetling crags. The stream itself is beautiful. From the basin at the falls to the lowest point at which we observed it, every succeeding step presents a delightful change. Here, its partially confined waters burst forth with considerable force, and struggle on among the opposing rocks for some distance; there, collected in a little basin, its limpid waves, pure as the drops of dew from the womb of the morning, circle round in ceaseless eddies, until they get within the influence of the downward current, when away they whirl, with a gurgling, happy sound, as if joyous at being released from their temporary confinement. Again, an aged kukui, whose trunk is white with the moss of accumulated years, throws his broad boughs far over the stream that nourishes his vigorous roots, casting a meridian shadow upon the surface of the water, which is reflected back with singular distinctness from its mirrored bosom.

To every other gratification must be added the incomparable fragrance of the fresh wood, in perpetual life and vigor, which presents a freshness truly grateful to the senses. But it is in vain to think of conveying an adequate idea of a scene where the sublime is mingled with the beautiful, and the bold and striking with the delicate and sensitive; where every sense is gratified, the mind calmed, and the whole soul delighted.

Famed as this spot is for its natural scenic attractions, intimated in the foregoing description, its claim of distinction with Hawaiians is indelibly fixed by the traditions of ancient times, the narration of which, at this point, will assist the reader to understand the character of the native mind and throw some light also on the history of the Hawaiians.

Tradition in this locality deals largely with Kamapuaa, the famous demigod whose exploits figure prominently in the legends of the entire group. Summarized, the story is about as follows:

Kamapuaa, the fabulous being referred to, seems, according to the tradition, to have possessed the power of transforming himself into a hog, in which capacity he committed all manner of depredations upon the possessions of his neighbors. He having stolen some fowls belonging to Olopana, who was the King of Oahu, the latter, who was then living at Kaneohe, sent some of his men to secure the thief. They succeeded in capturing him, and having tied him fast with cords, were bearing him in triumph to the King, when, thinking they had carried the joke far enough, he burst the bands with which he was bound, and killed all the men except one, whom he permitted to convey the tidings to the King. This defeat so enraged the monarch that he determined to go in person with all his force, and either destroy his enemy, or drive him from his dominions. He accordingly, despising ease inglorious,

Waked up, with sound of conch and trumpet shell,

The well-tried warriors of his native dell,

at whose head he sought his waiting enemy. Success attending the King’s attack, his foe was driven from the field with great loss, and betook himself to the gorge of Kaliuwaa, which leads to the falls. Here the King thought he had him safe; and one would think so too, to look at the immense precipices that rise on each side, and the falls in front. But the sequel will show that he had a slippery fellow to deal with, at least when he chose to assume the character of a swine; for, being pushed to the upper end of the gorge near the falls, and seeing no other way of escape, he suddenly transformed himself into a hog, and, rearing upon his hind legs and leaning his back against the perpendicular precipice, thus afforded a very comfortable ladder upon which the remnant of the army ascended and made their escape from the vengeance of the King. Possessing such powers, it is easy to see how he could follow the example of his soldiers and make his own escape. The smooth channels before described are said to have been made by him on these occasions; for he was more than once caught in the same predicament. Old natives still believe that they are the prints of his back; and they account for a very natural phenomenon, by bringing to their aid this most natural and foolish superstition.

Many objects in the neighborhood are identified with this remarkable personage, such as a large rock to which he was tied, a wide place in the brook where he used to drink, and a number of trees he is said to have planted. Many other things respecting him are current, but as they do not relate to the matter in hand, it will perhaps suffice to say, in conclusion, that tradition further asserts that Kamapuaa conquered the volcano, when Pele its goddess became his wife, and that they afterward lived together in harmony. That is the reason why there are no more islands formed, or very extensive eruptions in these later days, as boiling lava was the most potent weapon she used in fighting her enemies, throwing out such quantities as greatly to increase the size of the islands, and even to form new ones.

Visitors to the falls, even to this day, meet with evidences of the superstitious awe in which the locality is held by the natives. A party who recently visited the spot state that when they reached the falls they were instructed to make an offering to the presiding goddess. This was done in true Hawaiian style; they built a tiny pile of stones on one or two large leaves, and so made themselves safe from falling stones, which otherwise would assuredly have struck them.