On the leeward side of the island of Molokai, a little to the east of Kaluaaha lies the beautiful valley of Mapulehu, at the mouth of which is located the heiau, or temple, of Iliiliopae, which was erected by direction of Ku-pa, the Moi, to look directly out upon the harbor of Ai-Kanaka, now known as Pukoo. At the time of its construction, centuries ago, Kupa was the Moi, or sovereign, of the district embracing the Ahupuaas, or land divisions, of Mapulehu and Kaluaaha, and he had his residence in this heiau which was built by him and famed as the largest throughout the whole Hawaiian group.,

Kupa had a priest named Kamalo, who resided at Kaluaaha. This priest had two boys, embodiments of mischief, who one day while the King was absent on a fishing expedition, took the opportunity to visit his house at the heiau. Finding there the pahu kaeke1 belonging to the temple, they commenced drumming on it.

Some evil-minded persons heard Kamalo’s boys drumming on the Kaeke and immediately went and told Kupa that the priest’s children were reviling him in the grossest manner on his own drum. This so enraged the King that he ordered his servants to put them to death. Forthwith they were seized and murdered; whereupon Kamalo, their father, set about to secure revenge on the King.

Taking with him a black pig as a present, he started forth to enlist the sympathy and services of the celebrated seer, or wizard, Lanikaula, living some twelve miles distant at the eastern end of Molokai. On the way thither, at the village of Honouli, Kamalo met a man the lower half of whose body had been bitten off by a shark, and who promised to avenge him provided he would slay some man and bring him the lower half of his body to replace his own. But Kamalo, putting no credence in such an offer, pressed on to the sacred grove of Lanikaula. Upon arrival there Lanikaula listened to his grievances but could do nothing for him. He directed him, however, to another prophet, named Kaneakama, at the west end of the island, forty miles distant. Poor Kamalo picked up his pig and travelled back again, past his own home, down the coast to Palaau. Meeting with Kaneakama the prophet directed him to the heiau of Puukahi, at the foot of the pali, or precipice, of Kalaupapa, on the windward side of the island, where he would find the priest Kahiwakaapuu, who was a kahu, or steward, of Kauhuhu, the shark god. Once more the poor man shouldered his pig, wended his way up the long ascent of the hills of Kalae to the pali of Kalaupapa, descending which he presented himself before Kahiwakaapuu, and pleaded his cause. He was again directed to go still farther along the windward side of the island till he should come to the Ana puhi (eel’s cave), a singular cavern at sea level in the bold cliffs between the valleys of Waikolu and Pelekunu, where Kauhuhu, the shark god, dwelt, and to him he must apply. Upon this away went Kamalo and his pig. Arriving at the cave, he found there Waka and Moo, two kahus of the shark god. “Keep off! Keep off!” they shouted. “This place is kapu. No man can enter here, on penalty of death.”

“Death or life,” answered he, “it is all the same to me if I can only gain my revenge for my poor boys who have been killed.” He then related his story, and his wanderings, adding that he had come to make his appeal to Kauhuhu and cared not for his own life.

“Well,” said they to him, “Kauhuhu is away now fishing, but if he finds you here when he returns, our lives as well as yours will pay the forfeit. However, we will see what we can do to help you. We must hide you hereabouts, somewhere, and when he returns trust to circumstances to accomplish your purpose.”

But they could find no place to hide him where he would be secure from the search of the god, except the rubbish pile where the offal and scrapings of taro were thrown. They therefore thrust him and his pig into the rubbish heap and covered them over with the taro peelings, enjoining him to keep perfectly still, and watch till he should see eight heavy breakers roll in successively from the sea. He then would know that Kauhuhu was returning from his fishing expedition.

Accordingly, after waiting a while, the eight heavy rollers appeared, breaking successively against the rocks; and sure enough, as the eighth dissolved into foam, the great shark god came ashore. Immediately assuming human form, he began snuffing about the place, and addressing Waka and Moo, his kahus, said to them, “There is a man here.” They strenuously denied the charge and protested against the possibility of their allowing such a desecration of the premises. But he was not satisfied. He insisted that there was a man somewhere about, saying, “I smell him, and if I find him you are dead men; if not, you escape.” He examined the premises over and over again, never suspecting the rubbish heap, and was about giving up the search when, unfortunately, Kamalo’s pig sent forth a squeal which revealed the poor fellow’s hiding-place.

Now came the dread moment. The enraged Kauhuhu seized Kamalo with both hands and, lifting him up with the intention of swallowing him, according to his shark instinct, had already inserted the victim’s head and shoulders into his mouth before he could speak.

“O Kauhuhu, before you eat me, hear my petition; then do as you like.”

“Well for you that you spoke as you did,” answered Kauhuhu, setting him down again on the ground. “Now, what have you to say? Be quick about it.”

Kamalo then rehearsed his grievances and his travels in search for revenge, and presented his pig to the god.

Compassion arose in the breast of Kauhuhu, and he said, “Had you come for any other purpose I would have eaten you, but as your cause is a sacred one I espouse it, and will revenge it on Kupa the King. You must, however, do all that I tell you. Return to the heiau of Puukahi, at the foot of the pali, and take the priest Kahiwakaapuu on your back, and carry him up the pali over to the other side of the island, all the way to your home at Kaluaaha. Erect a sacred fence all around your dwelling-place, and surround it with the sacred flags of white kapa. Collect black hogs by the lau (four hundred), red fish by the lau, white fowls by the lau, and bide my coming. Wait and watch till you see a small cloud the size of a man’s hand arise, white as snow, over the island of Lanai. That cloud will enlarge as it makes its way across the channel against the wind until it rests on the mountain peaks of Molokai back of Mapulehu Valley. Then a rainbow will span the valley from side to side, whereby you will know that I am there, and that your time of revenge has come. Go now, and remember that you are the only man who ever ventured into the sacred precincts of the great Kauhuhu and returned alive.”

Kamalo returned with a joyful heart and performed all that had been commanded him. He built the sacred fence around his dwelling; surrounded the inclosure with sacred flags of white kapa; gathered together black hogs, red fish, and white fowls, each by the lau, as directed, with other articles sacred to the gods, such as cocoanuts and white kapas, and then sat himself down to watch for the promised signs of his revenge. Day after day passed until they multiplied into weeks, and the weeks began to run into months.

Finally, one day, the promised sign appeared. The snow white speck of cloud, no bigger than a man’s hand, arose over the mountains of Lanai and made its way across the stormy channel in the face of the opposing gale, increasing as it came, until it settled in a majestic mass on the mountains at the head of Mapulehu Valley. Then appeared a splendid rainbow, proudly overarching the valley, its ends resting on the high lands on either side. The wind began to blow; the rain began to pour, and shortly a furious storm came down the doomed valley, filling its bed from side to side with a mad rushing torrent, which, sweeping everything before it, spread out upon the belt of lowlands at the mouth of the valley, overwhelming Kupa and all his people in one common ruin, and washing them all into the sea, where they were devoured by the sharks. All were destroyed except Kamalo and his family, who were safe within their sacred inclosure, which the flood dared not touch, though it spread terror and ruin on every side of them. Wherefore the harbor of Pukoo, where this terrible event occurred, was long known as Ai Kanaka (man eater), and it has passed into a proverb among the inhabitants of that region that “when the rainbow spans Mapulehu Valley, then look out for the Waiakoloa,”—a furious storm of rain and wind which sometimes comes suddenly down that valley.

1 A species of drum made out of a hollowed section of the trunk of a cocoanut tree and covered over one end with sharkskin. It was generally used in pairs, one larger than the other, somewhat after the idea of the bass and tenor drums of civilized nations. One of these drums was placed on either side of the performer, and the drumming was performed with both hands by tapping with the fingers. By peculiar variations of the drumming, known only to the initiated, the performer could drum out whatever he wished to express in such a way, it is alleged, as to be intelligible to initiated listeners without uttering a single syllable with the voice. 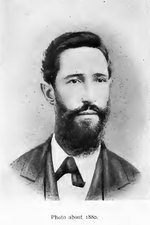