On Hawaii, also known as the Big Island, the largest volcanic mountain in the Hawaiian Islands

rises with a proud height of 4,207.3 m through the clouds against the blue sky. Its real dimension and beauty can unfortunately not be guessed when you stand at the foot of the volcano, because its real size is hidden in the dark of the depths of the ocean. Held secret to our human eyes. If one were to measure the volcano, which also made all other volcanoes from the Hawaiian Islands out of the water, Mauna Kea would be the largest mountain in the world with a gigantic and majestic height of over 10,203 meters. 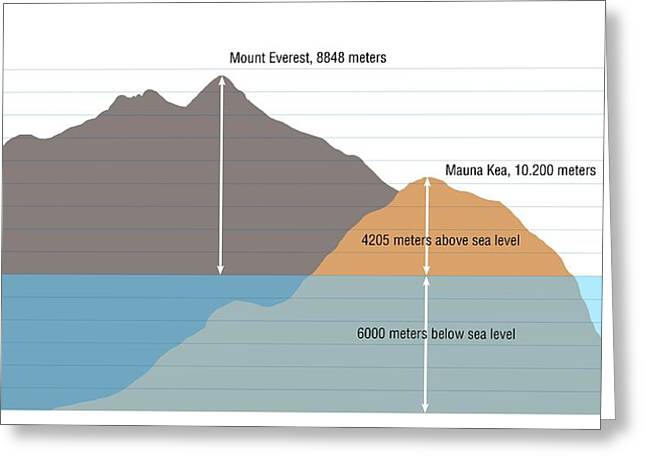 The otherwise highest mountain in the world, Mount Everest in the Himalayas of Nepal, China (Tibet) (Tibet. Chomolungma, Nepal. Sagarmatha) looks small at 8,848 meters. (Mauna Kea’s neighboring volcano, Mauna Loa, is 38 meters smaller. Over a million years ago, Mauna Kea and the Hawaiian Islands were born out of the Atlantic. Hawaii is the youngest island of all the Hawaiian Islands. Its last eruption occurred 6 years ago Calculated between 000 and 4,000 years ago, it is now considered a resting giant.

Mauna Kea or now also Maunakea, which the word co-written was proposed by the UH Hilo School of Hawaiian Language and accepted by OMKM (Office of Maunakea Management), means „white mountain“ in Hawaiian and is the short form of Mauna a Wākea , the heavenly father.

In ancient Hawaiian mythology, Heavenly Father is Wākea. Long ago, when the world was still young, Wākea the Father of Heaven looked down and Papa (Papahānaumoku), Mother Earth with the wonderful blue ocean dress, fell in love with each other. The love was so strong that the earth stretched out of the water into the sky and the island of Hawai’i gave birth to volcanoes and mountains. Through their love they gave birth to the goddess of fire Pele. Wākea put a picturesque, heavenly lei of clouds around her enchanting neck. Afterwards the Heavenly Father lay protectively over the Mother Earth Papa and the people living there. With his stars, Heavenly Father guides and guides us across the vast ocean like on the island. Mother Earth feeds us through her generous fertility. This love, the encounter of Mother Earth and Heavenly Father, gave birth to life, man, animals, plants, trees. The most famous, majestic beauty, the snow goddess Poli’ahu, made her home high up on Maunakea. When Poli’ahu saw the hustle and bustle of the natives, she mingled with the people on the eastern slope of Maunakea.

They loved tobogganing and being with Poli’ahu until one day a stranger came who challenged Poli’ahu to toboggan. The snow goddess won the first sled down. To ensure that the second toboggan run was fair, the snow goddess Poli’ahu exchanged the sled with the stranger. Here too, Poli’ahu easily overtook the stranger and won. The third time, the stranger tried to prevent the snow goddess from winning by opening lava flows in front of her and showing herself as the fire goddess Pele. Through this battle between Pele, goddess of fire and Poli’ahu, goddess of snow, they created the thick basalt of the mountain. The glowing lava was quickly cooled by the snow.
These beings, these gods, embody the forces of the mountain that are still there today. The Hawaiian stories about it are adorable, beautiful, direct, unforgiving and yet as deadly as nature and contain lessons and warnings. These stories show that the Hawaiians had a deep understanding of the geological, meteorological, and hydrological forces that shaped these islands and their ecology.
That is why the peaks of the island of Hawaii are sacred in Hawaiian mythology. Because the mountain peaks of the Maunakeas abut the vault of the earth, the summit visitors were able to speak to the dead and to his deceased relatives as well as to see. The old law allowed that only senior Ali’i were allowed to visit the top of the mountain.

Historically and according to archaeological finds, the first arrivals settled on the nutritiously rich shores of the island of Hawaii. Later in the 12th and 13th centuries, the Hawaiians expanded from the safe forests more and more inland against the flanks of the Mauna Loa and Maunakea. There they operated, among other things, quarries, especially since the first inhabitants with the dense volcanic-glacial basalts, tools for hunting and fishing.

This early era was followed by cultural expansion between the 12th and late 18th centuries. King Kamehameha I divided the country into regions that were tailored to the needs of the local population.

These regions, called Ahupua’a, generally consisted of long stripes of land that stretched from the mountain peaks of the interior to the coast. The Hawaiians living on the slopes of the Maunakea volcano were the main food sources in the Mane Naio forests, the hunt for the birds living there. The hunted bird species included

the ʻuaʻu (Pterodroma sandwichensis), the nēnē (Branta sandvicensis) and the palila (Loxioides bailleui). The dense koa ʻōhiʻa forests gave the natives living on the coast an excellent wood for processing their canoes, and they also found richly decorated bird feathers to decorate their clothes.

Before James Cook, 1778, and other Europeans arrived in Hawaii in the late 18th century, 3 foreign visits to Hawaii had already been registered. The first visit was from Pastor Pa’ao, who went ashore in Kohala. Pa’ao’s son, Opili, later wrote that in the south-west of the island, a few white strangers went ashore and were preparing for the rise of the Mauna Kea. Opili wrote down a name of a strange white man, that of Manahini. The third visit was from seven strangers who landed in the Bay of Kearake’kua with a brightly painted boat.

The contact on the isolated islands with Europe and America had considerable consequences for the islanders. Indigenous Hawaiians were devastated by introduced diseases; Port cities such as Hilo, Kealakekua and Kailua grew with the establishment of trade. and the Adze quarries on Mauna Kea were abandoned after the introduction of metal tools.

The first and earliest western reports, as well as depictions of the island of Hawaii, including Maunakea, were drawn up by researchers in the late 18th and early 19th centuries. The following climbs from Maunakea were recorded:

In these early times, in the late 19th and early 20th centuries, you could only take the extremely arduous route on horseback if you wanted to reach the volcanic peak.
In 1943, the so-called saddle road was built to cross the saddle-shaped plateau between Mauna Loa and Maunakea, which now made access to the foot of Maunakea considerably easier.
It wasn’t until 1964 that easier access for vehicles from the saddle road to the vault of heaven was made easier by the construction of a road.
Due to the height of the Maunakeas, the dry environment as well as no wind (stable air flow), thin air, no light pollution by civilization, this place receives the most important point on earth from today’s worldwide research in astronomy.
The first optical telescope from the University of Hawaii was built on the dome of Maunakea around 1968. Step by step, more from optical mirror telescopes to ever larger infrared spectral range telescopes were strained to the summit. These research institutions were funded by universities and institutions from 11 nations that have teamed up and collectively call themselves the Mauna Kea Observatory. At present there are 13 telescopes that adorn the Maunakea summit, 9 of which are no longer used.

In 2009, the United States chose a gigantic project of an unprecedented 30-meter telescope on Maunakea from five other locations around the world without culture, without involving the indigenous people of Hawaii. This mountain is the holiest of the indigenous people of Hawaii because it is from him that they originated on the island. This has been largely ignored and ignored by the United States and politics, and has been the subject of debate to this day. On October 7, 2014, the Hawaiians launched peaceful demonstrations around the world, following several arrests that had blocked the road to keep construction workers and machinery away from the summit. TV stations, print media and social media reported about it. The TMT (Thirty Meter Telescope) should be completed simultaneously with the 39 meter extreme large telescope in Chile.

Why do Hawaii’s natives demonstrate at Maunkea? Politics, economy and research meet here against old Hawaiian culture, tradition, mythology and religion. According to which rules, rights and laws are negotiated knowing that the Hawaiian Islands was or is an independent state in the past.
One thing, however, has produced this still peaceful demonstration: the unification, the cohesion, the pride of the indigenous people of Hawaii. The oppressed people rise peacefully but powerfully to protect their voice for their culture, which is now heard worldwide.

The demonstration managed to get the Hawaii Supreme Court to invalidate the TMT’s building permits on December 2, 2015. The court ruled that the due process was not followed. The heavy construction equipment was removed from the summit of Maunakea. The TMT company again entered a building permit, which was granted by the Supreme Court on September 28, 2018. On October 30, 2018, the court confirmed the new building permit.
Since July 15th, 2019, the indigenous people are again demonstrating and organized in such a size, which continues to this day and will continue to do so. It is being negotiated in court and politically difficult, with the TMT company increasingly losing its supporters at the time.

The current peaceful demonstration has reached a global spread where it is reported around the world. Thousands of people who are native to Hawaii have traveled to Honolulu from across the Pacific to demonstrate against the TMT.

The song Kū Haʻaheo, which was written by Hinaleimoana Wong for the Maunakea and its fighters, which deals with the proud cohesion of the Hawaiians, suddenly became so well known that on November 8, 2019, this song succeeded on the same day worldwide on the same day Time to sing.

The sea of Hawai’i surges in turmoil
The earth of Haumea rumbles and shakes
The highest heavens shudder up above
Alas! Woeful indeed are the heartless foreigners

Where are you soldiers of Keawe
Along with those of Maui and O’ahu
Unite, join together with those of Kaua’i
Marching alongside the descendants of Ni’ihau

Move forward young ones and drink of the bitter waters
Be fearless, steadfast for there is no turning back
Let’s press onward straight on the path of victory
Alas! Woeful are the heartless foreigners!