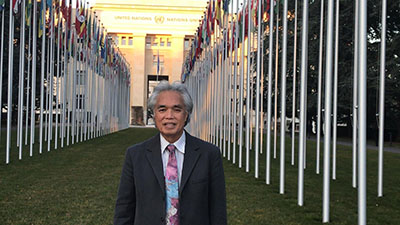 Youʻd be surprised to know how many countries at the United Nations empathize and agree with our quest to free Hawaiʻi from the United States.

When the UN started in 1945, there were 51 independent member countries. Today there are 193! That means nearly three-fourths of the current UN became independent and gained membership through some form of struggle for liberation; many through a peaceful decolonization process, but many through armed conflict — some extremely violent and bloody. Thus, the great majority of the UN members understand what it means to struggle for, and finally gain, independence.

So why don’t countries that empathize with us just recognize Hawaiʻi as an independent nation and expose the United States’ blatant ‘statehood’ scam? It’s surprisingly simple… self-preservation.

About 10 years ago, I was chatting with a Carribean ambassador to the UN and he said to me: “Remember that every diplomat has been sent by his country to look after the best interests of his country”. A diplomats’ job is not only to pursue what will be good for his/her country, but they must do their utmost to avoid what could be harmful. Wow! That explains why it’s not all cut-and-dry, right or wrong.

Decisions are made by the individual country based on how that decision will affect the country’s interests. At this point, any country that dares to profess Hawaiʻi is independent (even out of the noblest of intentions), would bring upon itself retaliation from the U.S. And the U.S. has abundantly demonstrated (ever since they grabbed Hawaiʻi in 1898) the extent it will go to have its way… invasion … regime change… denationalization… political suppression… economic bondage and so forth. A country may totally agree that our country was unlawfully usurped and is under belligerent occupation, but to challenge the U.S. directly on this matter would be suicidal.

Over the past few years our discussion with countries has been, how can they help us at minimal risk to themselves?

We have found a way… and are working on implementing a plan at the UN General Assembly. Since Hawaiʻi is not a member of that country club (and we’re not trying to become one) we are relying on its members to call on the General Assembly to conduct a procedural revue of a resolution the General Assembly itself passed in 1959 that basically consigned the Hawaiian Islands to the United States.

The purpose of the plan is to cause the UN General Assembly to discover that it made an error in accepting the U.S.’ report claiming the Hawaiian people had freely consented (through the Statehood Plebiscite) to become a “state” of the United States. And in discovering they made an error, the UN General Assembly would be required by its own rules, to rescind that 1959 resolution. Thus, the U.S. claim that Hawaiʻi is a state of the U.S. becomes null and void. And, by default, the Hawaiian Kingdom emerges as a sovereign, independent nation-state.

Ua mau ke ea o ka ʻāina i ka pono. The sovereignty (life) of the land is perpetuated in righteousness.