Long ago, when the Hawaiians were in the darkness of superstition and kahunaism, with their gods and lords many, there lived at Mokuleia, Waialua, two old men whose business it was to pray to Kaneaukai for a plentiful supply of fish. These men were quite poor in worldly possessions, but given to the habit of drinking a potion of awa after their evening meal of poi and fish.

The fish that frequented the waters of Mokuleia were the aweoweo, kala, manini, and many other varieties that find their habitat inside the coral reefs. Crabs of the white variety burrowed in the sand near the seashore and were dug out by the people, young and old. The squid also were speared by the skilful fishermen, and were eaten stewed, or salted and sun-dried and roasted on the coals. The salt likely came from Kaena Point, from salt-water evaporation in the holes of rocks so plentiful on that stormy cape. Or it may have been made on the salt pans of Paukauwila, near the stream of that name, where a few years ago this industry existed on a small scale.

But to return to our worshippers of Kaneaukai. One morning on going out upon the seashore they found a log of wood, somewhat resembling the human form, which they took home and set in a corner of their lowly hut, and continued their habit of praying to Kaneaukai. One evening, after having prepared a scanty supper of poi and salt, with perhaps a few roasted kukui-nuts, as a relish, and a couple of cocoanut cups of awa as their usual drink, they saw a handsome young man approaching, who entered their hut and saluted them. He introduced himself by saying, “I am Kaneaukai to whom you have been praying, and that which you have set up is my image; you have done well in caring for it.”

He sat down, after the Hawaiian custom, as if to share their evening meal, which the two old men invited him to partake of with them, but regretted the scanty supply of awa. He said: “Pour the awa back into the bowl and divide into three.” This they did and at once shared their meal with their guest.

After supper Kaneaukai said to the two old men, “Go to Keawanui and you will get fish enough for the present.” He then disappeared, and the fishermen went as instructed and obtained three fishes; one they gave to an old sorceress who lived near by, and the other two they kept for themselves.

Soon after this there was a large school of fish secured by the fishermen of Mokuleia. So abundant were the fish that after salting all they could, there was enough to give away to the neighbors; and even the dogs had more than they desired.

Leaving the Mokuleia people to the enjoyment of their unusual supply of fish, we will turn to the abode of two kahunas, who were also fishermen, living on the south side of Waimea Valley, Oahu. One morning, being out of fish, they went out into the harbor to try their luck, and casting their net they caught up a calcareous stone about as large as a man’s head, and a pilot fish. They let the pilot fish go, and threw the stone back into the sea. Again they cast their net and again they caught the stone and the pilot fish; and so again at the third haul. At this they concluded that the stone was a representative of some god. The elder of the two said: “Let us take this stone ashore and set it up as an idol, but the pilot fish we will let go.” So they did, setting it up on the turn of the bluff on the south side of the harbor of Waimea. They built an inclosure about it and smoothed off the rocky bluff by putting flat stones from the immediate neighborhood about the stone idol thus strangely found.

About ten days after the finding of the stone idol the two old kahunas were sitting by their grass hut in the dusk of the evening, bewailing the scarcity of fish, when Kaneaukai himself appeared before them in the guise of a young man. He told them that they had done well in setting up his stone image, and if they would follow his directions they would have a plentiful supply of fish. Said he, “Go to Mokuleia, and you will find my wooden idol; bring it here and set it up alongside of my stone idol.” But they demurred, as it was a dark night and there were usually quicksands after a freshet in the Kamananui River. His answer was, “Send your grandsons.” And so the two young men were sent to get the wooden idol and were told where they could find it.

The young men started for Mokuleia by way of Kaika, near the place where salt was made a few years ago. Being strangers, they were in doubt about the true way, when a meteor (hoku kaolele) appeared and went before them, showing them how to escape the quicksands. After crossing the river they went on to Mokuleia as directed by Kaneaukai, and found the wooden idol in the hut of the two old men. They shouldered it, and taking as much dried fish as they could carry, returned by the same way that they had come, arriving at home about midnight. 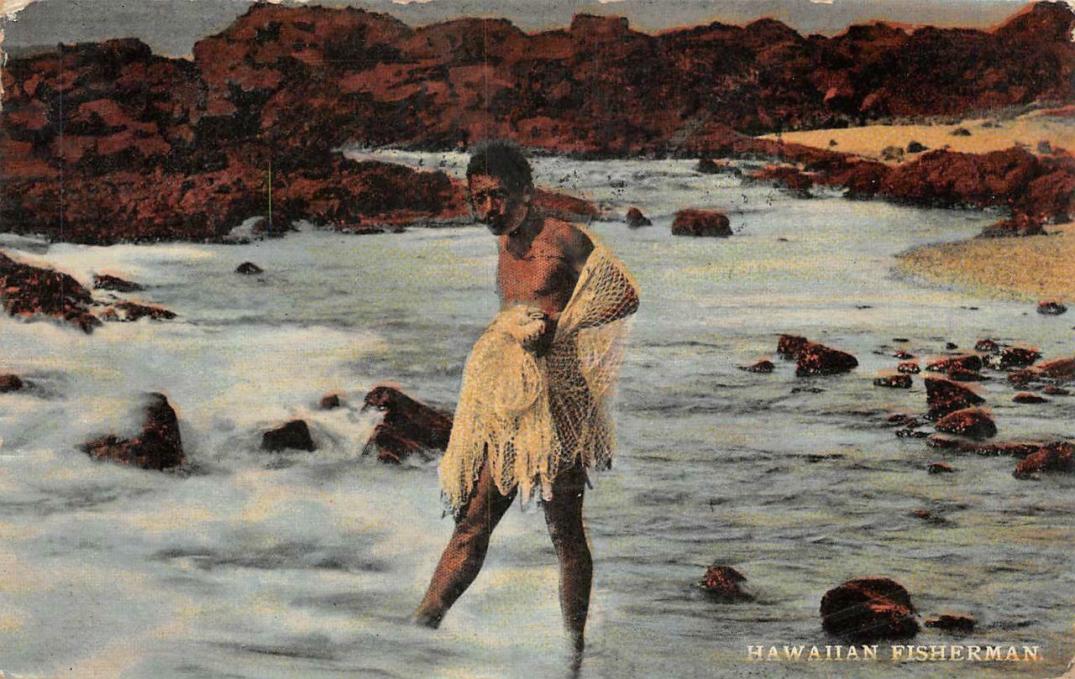 The next day the two old kahunas set up the wooden idol in the same inclosure with the stone representative of Kaneaukai. The wooden image has long since disappeared, having been destroyed, probably, at the time Kaahumanu made a tour of Oahu after her conversion to Christianity, when she issued her edict to burn all the idols. But the stone idol was not destroyed. Even during the past sixty years offerings of roast pigs are known to have been placed before it. This was done secretly for fear of the chiefs, who had published laws against idolatry.

Accounts differ, various narrators giving the story some embellishments of their own. So good a man as a deacon of Waialua in telling the above seemed to believe that, instead of being a legend it was true; for an old man, to whom he referred as authority, said that one of the young men who went to Mokuleia and brought the wooden idol to Waimea was his own grandfather. 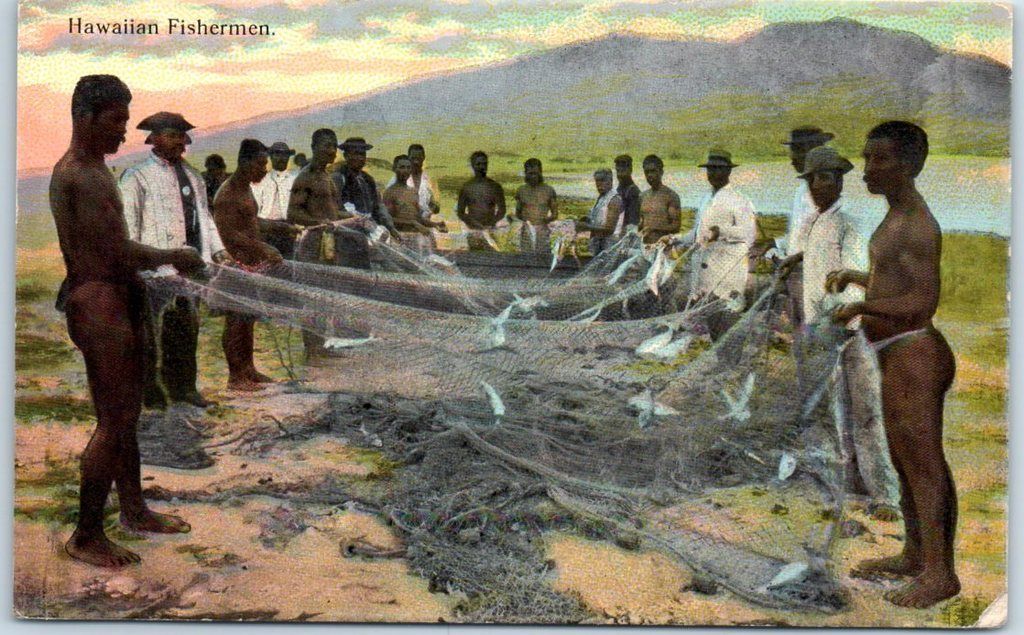 An aged resident of the locality gives this version: Following the placement of their strangely found stone these two men dreamed of Kaneaukai as a god in some far-distant land, to whom they petitioned that he would crown their labors with success by granting them a plentiful supply of fish. Dreaming thus, Kaneaukai revealed himself to them as being already at their shore; that the stone which they had been permitted to find and had honored by setting up at Kehauapuu, was himself, in response to their petitions; and since they had been faithful so far, upon continuance of the same, and offerings thereto, they should ever after be successful in their fishing. As if in confirmation of this covenant, this locality has ever since been noted for the periodical visits of schools of the anae-holo and kala, which are prevalent from April to July, coming, it is said, from Ohea, Honuaula, Maui, by way of Kahuku, and returning the same way.

So strong was the superstitious belief of the people in this deified stone that when, some twenty years ago, the road supervisor of the district threw it over and broke off a portion, it was prophesied that Kaneaukai would be avenged for the insult. And when shortly afterward the supervisor lost his position and removed from the district, returning not to the day of his death; and since several of his relatives have met untimely ends, not a few felt it was the recompense of his sacrilegious act.