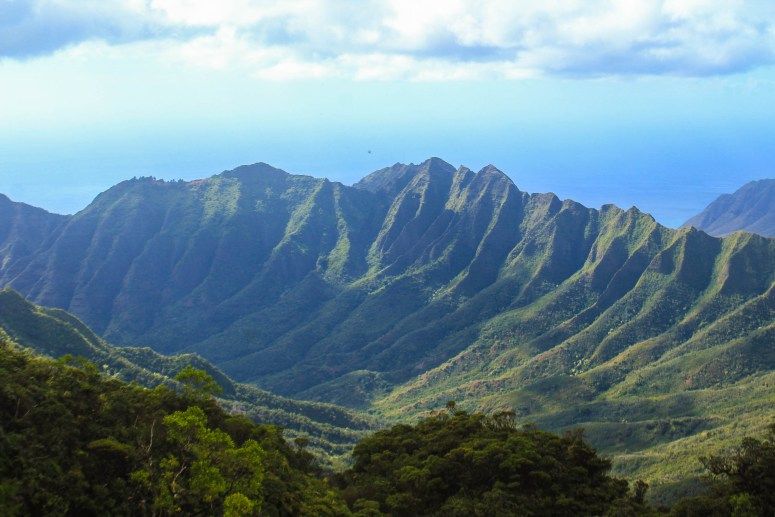 There formerly lived on the Kaala Mountains a chief by the name of Kahaakea. He had two children, a boy and a girl, twins, whose mother had died at their birth. The brother was called Kauawaahila (Waahila Rain), and the girl Kauakiowao (Mountain Mist). Kahaakea was very tenderly attached to his motherless children, and after a while took to himself a wife, thinking thus to provide his children with a mother’s care and love. This wife was called Hawea and had a boy by her former husband. This boy was deformed and ugly, while the twins were very beautiful. The stepmother was jealous of their beauty, and resented the universal admiration expressed for them, while no one noticed her boy except with looks of aversion. She was very considerate toward the twins when their father was present, but hated and detested them most violently. When they were about ten years old their father had occasion to go to Hawaii, and had to remain away a long time. He felt perfectly safe in leaving his children with his wife, as she had always feigned great love for them, and had successfully concealed from him her real feelings in regard to them. But as soon as he was fairly away she commenced a series of petty persecutions of the poor children.

It seems the mother of the children had been “uhae ia” at her death. That is, certain prayers, invocations, fasting, and humiliation had been performed by certain relatives of the deceased, and quantities of prepared awa, black, unblemished pig, red fish, and all the customary food of the gods, had been prepared and offered with the object of strengthening the spirit of the departed and of attracting it strongly, as well as giving it a sort of power and control over mundane affairs and events. So when Hawea began to persecute her stepchildren, the spirit of their own mother would assist and protect them. 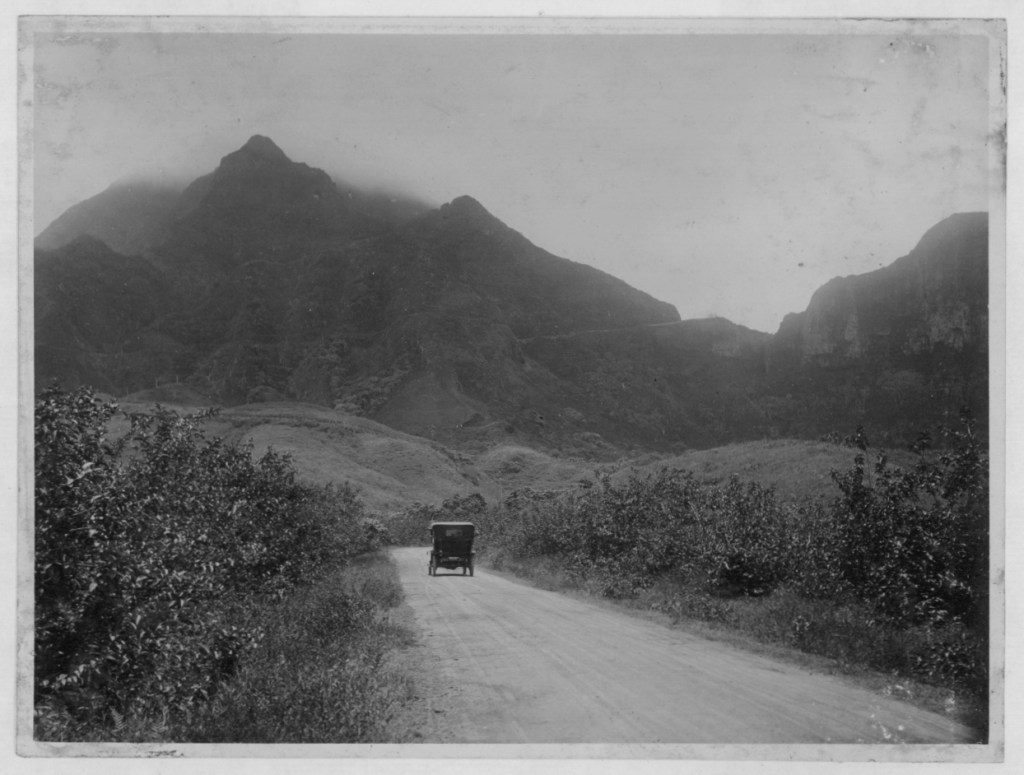 The persecutions of the stepmother at last became unendurable to the twins. She not only deprived them of food, clothing, and water, but subjected them besides to all sorts of indignities and humiliations. Driven to desperation, they fled to Konahuanui, the mountain peak above the Pali of Nuuanu; but were soon discovered and driven away from there by the cruel Hawea. They then went to the head of Manoa Valley. The stepmother was not at all pleased at their getting out of the way of her daily persecutions, and searched for them everywhere. She finally tracked them by the constant appearance of rainbows at the head of Manoa Valley, those unfailing attendants of rain and mist. The children were again driven away and told to return to Kaala, where they would be constantly under her eye; but they ran and hid themselves in a small cave on the side of the hill of Kukaoo, whose top is crowned by the temple of the Menehunes. Here they lived some time and cultivated a patch of sweet potatoes, their food at this time being grasshoppers and greens. The greens were the leaves and the tender shoots of the popolo, aheahea, pakai, laulele and potato vines, cooked by rolling hot stones around and among them in a covered gourd. This is called the puholoholo.

When their potato tubers were fit to be eaten, the brother (Waahila Rain) made a double imu (oven), having a kapu, or sacred side, for his food and a noa, or free side, for his sister. The little cave that was their dwelling was also divided in two, a sacred and a free part, respectively, for brother and sister. The cave can still be seen, and the wall of stone dividing it in two was still intact a few years ago, as also was the double imu. In olden times it was tabooed to females to appear at any eating-place of the males.

When their crops were fairly ripe, the stepmother found them again, and drove them away from their cave, she appropriating the fruit of their labors. The children fled to the rocky hills just back of Punahou, where they found two small caves, which the brother and sister occupied, respectively, as dwellings. The rolling plains and small ravines of the surrounding country, and of what was later known as the Punahou pasture, were not then covered with manienie grass, but with the indigenous shrubs and bushes, tall limas, aheaheas, popolo, etc., making close thickets, with here and there open spaces covered with manienie-akiaki, the valuable medicinal grass of the olden times. These shrubs and bushes either bore edible fruit or flowers, or the leaves and tender shoots made nourishing and satisfying food when cooked in the way previously described. The poor children lived on these and grasshoppers, and sometimes wild fowl.

One day the sister, Kauakiowao, told her brother that she wanted to bathe, and complained of their having taken up their residence in a place where no water could be found. Her brother hushed her complaint by telling her that it was a safe place, and one where their stepmother would not be likely to look for them, but he would try to get her some water. In his trips around the neighborhood for fruit and greens he had noticed a large rain-water pond to the east of the hill on which they dwelt. This pond was called Punahou Here he sometimes came to snare wild ducks. He also had met and knew the Kakea water god, a moo, who had charge of and controlled all the water sources of Manoa and Makiki Valleys. This god was one of the ancestors of the children on the mother’s side, and was on the best of terms with Waahila rain. The boy paid him a visit, and asked him to assist him to open a watercourse from the pond of Kanawai to a place he indicated in front of and below the caves inhabited by himself and his sister. The old water god not only consented to help his young relative, but promised to divide the water supply of the neighboring Wailele spring, and let it run into the watercourse that the boy would make, thus insuring its permanence.

Waahila Rain then went to the pond of Kanawai and dived under, the water god causing a passage to open underground to the spot indicated, and swam through the water underground till he came out at the place now known as the Punahou Spring. The force of the rushing waters as they burst through the ground soon sufficed to make a small basin, which the boy proceeded to bank and wall up, leaving a narrow outlet for the surplus waters. With the invisible help of the old water god, he immediately set to work to excavate a good-sized pond for his sister to swim in, and when she awoke from a noonday nap, she was astonished to behold a lovely sheet of water where, in the morning, was only dry land. Her brother was swimming and splashing about in it, and gayly called to his sister to come and try her bathing-place. 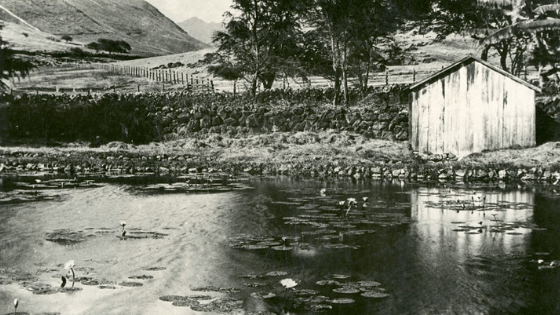 Kauawaahila afterward made some kalo patches, and people, attracted by the water and consequent fertility of the place, came and settled about, voluntarily offering themselves as vassals to the twins. More and more kalo patches were excavated, and the place became a thriving settlement. The spring became known as Ka Punahou (the new spring), and gave its name to the surrounding place.

About this time Kahaakea returned, and hearing of the persecutions to which his beloved children had been subjected, killed Hawea and then himself. Rocky Hill, the home of the children, was called after him, and is known by that name to the present day. Hawea has ever since then been a synonyme in the Hawaiian mind for a cruel stepmother.

The Mountain Mist and Waahila Rain afterward returned to the home of their infancy, Kaala, where they would stay a while, occasionally visiting Konahuanui and upper Manoa Valley, and may be met with in these places at the present day.

They also occasionally visited Punahou, which was under their especial care and protection; but when the land and spring passed into the hands of foreigners, who did not pay homage to the twins, and who allowed the springs to be defiled by the washing of unclean articles and by the bathing of unclean persons, the twins indignantly left the place, and retired to the head of Manoa Valley.

They sometimes pass swiftly over their old home on their way to Kaala, or Konahuanui, and on such occasions will sometimes linger sorrowfully for a few minutes about Rocky Hill. The rain-water pond of Kanawai is now always dry, as the shrubs and bushes which supplied the food of the twins favored of the gods have disappeared. Old natives say that there is now no inducement for the gentle rain of the Uakiowao and Uawaahila to visit those bare hills and plains, as they would find no food there.