From Ellis’s “Tour of Hawaii”

In the reign of Kealiikukii, an ancient king of Hawaii, Kahawali, chief of Puna, and one of his favorite companions went one day to amuse themselves with the holua (sled), on the sloping side of a hill, which is still called ka holua ana o Kahawali (Kahawali’s sliding-place). Vast numbers of the people gathered at the bottom of the hill to witness the game, and a company of musicians and dancers repaired thither to add to the amusement of the spectators.

The performers began their dance, and amidst the sound of drums and the songs of the musicians the sledding of Kahawali and his companion commenced. The hilarity of the occasion attracted the attention of Pele, the goddess of the volcano, who came down from Kilauea to witness the sport. Standing on the summit of the hill in the form of a woman, she challenged Kahawali to slide with her. He accepted the offer, and they set off together down the hill. Pele, less acquainted with the art of balancing herself on the narrow sled than her rival, was beaten, and Kahawali was applauded by the spectators as he returned up the side of the hill.

Before starting again, Pele asked him to give her his papa holua, but he, supposing from her appearance that she was no more than a native woman, said: “Aole! (no!) Are you my wife, that you should obtain my sled?” And, as if impatient at being delayed, he adjusted his papa, ran a few yards to take a spring, and then, with this momentum and all his strength he threw himself upon it and shot down the hill. 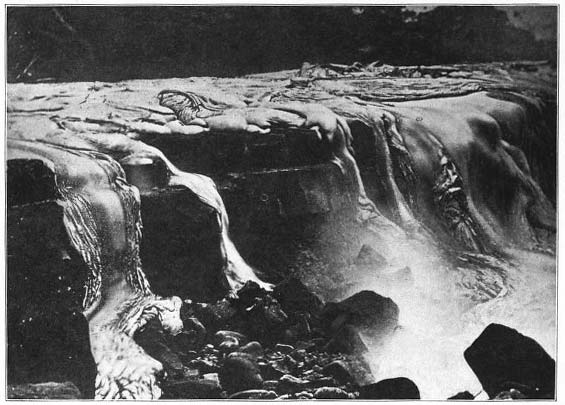 Pele, incensed at his answer, stamped her foot on the ground and an earthquake followed, which rent the hill in sunder. She called, and fire and liquid lava arose, and, assuming her supernatural form, with these irresistible ministers of vengeance, she followed down the hill. When Kahawali reached the bottom, he arose, and on looking behind saw Pele, accompanied by thunder and lightning, earthquake, and streams of burning lava, closely pursuing him. He took up his broad spear which he had stuck in the ground at the beginning of the game, and, accompanied by his friend, fled for his life. The musicians, dancers, and crowds of spectators were instantly overwhelmed by the fiery torrent, which, bearing on its foremost wave the enraged goddess, continued to pursue Kahawali and his companion. They ran till they came to an eminence called Puukea. Here Kahawali threw off his cloak of netted ki leaves and proceeded toward his house, which stood near the shore. He met his favorite pig and saluted it by touching noses, then ran to the house of his mother, who lived at Kukii, saluted her by touching noses, and said: “Aloha ino oe, eia ihonei paha oe e make ai, ke ai mainei Pele.” (Compassion great to you! Close here, perhaps, is your death; Pele comes devouring.) Leaving her, he met his wife, Kanakawahine, and saluted her. The burning torrent approached, and she said: “Stay with me here, and let us die together.” He said: “No; I go, I go.” He then saluted his two children, Poupoulu and Kaohe, and said, “Ke ue nei au ia olua.” (I grieve for you two.) The lava rolled near, and he ran till a deep chasm arrested his progress. He laid down his spear and walked over on it in safety. His friend called out for his help; he held out his spear over the chasm; his companion took hold of it and he drew him securely over. By this time Pele was coming down the chasm with accelerated motion. He ran till he reached Kula. Here he met his sister, Koai, but had only time to say, “Aloha oe!” (Alas for you!) and then ran on to the shore. His younger brother had just landed from his fishing-canoe, and had hastened to his house to provide for the safety of his family, when Kahawali arrived. He and his friend leaped into the canoe, and with his broad spear paddled out to sea. Pele, perceiving his escape, ran to the shore and hurled after him, with prodigious force, great stones and fragments of rock, which fell thickly around but did not strike his canoe. When he had paddled a short distance from the shore the kumukahi (east wind) sprung up. He fixed his broad spear upright in the canoe, that it might answer the double purpose of mast and sail, and by its aid he soon reached the island of Maui, where they rested one night and then proceeded to Lanai. The day following ]they moved on to Molokai, thence to Oahu, the abode of Kolonohailaau, his father, and Kanewahinekeaho, his sister, to whom he related his disastrous perils, and with whom he took up his permanent abode.